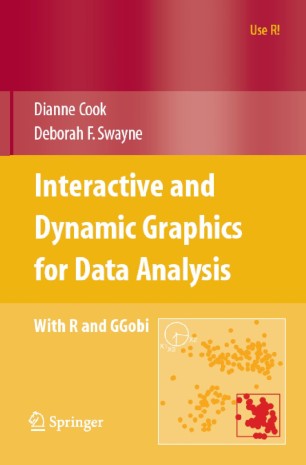 With R and Ggobi

Part of the Use R! book series (USE R)

This richly illustrated book describes the use of interactive and dynamic graphics as part of multidimensional data analysis. Chapters include clustering, supervised classification, and working with missing values. A variety of plots and interaction methods are used in each analysis, often starting with brushing linked low-dimensional views and working up to manual manipulation of tours of several variables. The role of graphical methods is shown at each step of the analysis, not only in the early exploratory phase, but in the later stages, too, when comparing and evaluating models.

All examples are based on freely available software: GGobi for interactive graphics and R for static graphics, modeling, and programming. The printed book is augmented by a wealth of material on the web, encouraging readers follow the examples themselves. The web site has all the data and code necessary to reproduce the analyses in the book, along with movies demonstrating the examples.

The book may be used as a text in a class on statistical graphics or exploratory data analysis, for example, or as a guide for the independent learner. Each chapter ends with a set of exercises.

The authors are both Fellows of the American Statistical Association, past chairs of the Section on Statistical Graphics, and co-authors of the GGobi software. Dianne Cook is Professor of Statistics at Iowa State University. Deborah Swayne is a member of the Statistics Research Department at AT&T Labs.