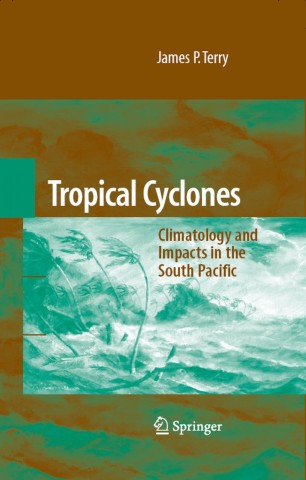 Climatology and Impacts in the South Pacific

Tropical Cyclones – Climatology and Impacts in the South Pacific

This book describes the behaviour of tropical cyclones in the South Pacific and investigates the broad range of disturbance effects these violent storms have on the physical environments of the islands that lie in their path and the people who live on them. It is the first book to link these two themes – the characteristics of cyclones and their landscape impacts.

Students of physical geography will find this book an authoritative source. It should also appeal to those concerned with climate change, extreme events, natural hazards, tropical islands, tropical geomorphology and hydrology, and to all those who have a general curiosity about the vast Oceania region and its remote, vulnerable islands.

The volume is divided into two complementary parts. The first part explains the nature of tropical cyclones, their genesis, structure, behaviour, and extreme meteorological conditions. Future cyclone activity related to climate change is also considered. Part two deals with geomorphological and hydrological responses to tropical cyclones on South Pacific islands. Attention is focused on the effects of cyclones on coral reefs, coasts, slopes and rivers, which often lead to profound landform changes and have lasting influences on both island evolution and on the lives of the Islanders.

Examples and illustrations are drawn widely from across the South Pacific. Numerous maps, informative drawings, and many spectacular photographs are used with great effect throughout, resulting in a highly readable volume.

James P. Terry is Associate Professor and former Head of the School of Geography at the University of the South Pacific in Fiji.

Cover illustration: a painting by Peni Vuniceva, well-known one-handed artist in Fiji who suffered from leprosy since childhood. The painting depicts the wrath of Tropical Cyclone Oscar in March 1983 lashing the island of Ovalau in Fiji, based on stories told to him by his wife who was on the island at the time.