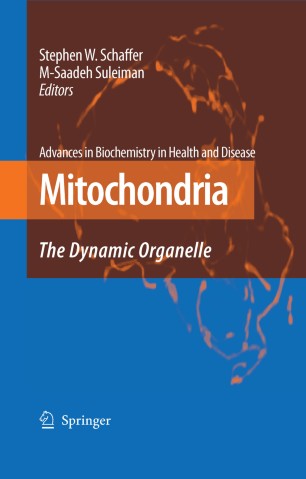 Part of the Advances in Biochemistry in Health and Disease book series (ABHD, volume 2)

Mitochondria: The Dynamic Organelle is a timely contribution that addresses the reemergence of the mitochondria as a key player in cellular function and pathology.

Stephen W. Schaffer has been a professor of Pharmacology at the University of South Alabama, College of Medicine since 1988. He received training in mitochondrial function from the Johnson Research Foundation at the University of Pennsylvania. His research focuses on the effects of diabetes and angiotensin II on the heart, with a particular emphasis on the effects of mitochondrial DNA damage on the cardiomyocyte. He is a recipient of the Vincenzo Penagia Distinguished Scientist Award and is a fellow of the International Academy of Cardiovascular Sciences. He serves on the editorial board of Amino Acids and Molecular and Cellular Biochemistry and is editor of several books.

M.-Saadeh Suleiman is currently a Professor of Cardiac Physiology at the Faculty of Medicine and Dentistry, University of Bristol. He joined the Department of Physiology in Bristol in 1988 and was one of the founders of the Bristol Heart Institute. His research is focused on myocardial protection including the role of mitochondria, and had significant impact on cardiac surgery where he was a member of the team that received the UK Hospital Doctor Award in 2005 for innovative surgery. He was a recipient of a Fulbright Fellowship and in 2003 was awarded a DSc in Physiology from the University of Bristol. He was elected twice to the executive committee of the British Society of Cardiovascular Research (1998-2004).