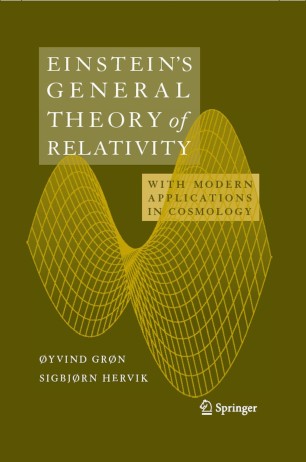 With Modern Applications in Cosmology

Many of us have experienced the same; fallen and broken something. Yet supposedly, gravity is the weakest of the fundamental forces; it is claimed to be 10-15 times weaker than electromagnetism. Still, every one of us has more or less had a personal relationship with gravity.

Einstein’s General Theory of Relativity: With Modern Applications in Cosmology by Oyvind Gron and Sigbjorn Hervik is about gravity and the concept of gravity as Albert Einstein saw it- curved spaces, four-dimensional manifolds and geodesics. The book starts with the 1st principals of relativity and an introduction to Einstein’s field equations. Next up are the three classical tests of the relativity theory and an introduction to black holes.

The book contains several topics not found in other textbooks, such as Kaluza-Klein theory, anisotropic models of the universe, and new developments involving brane cosmology.

Gron and Hervik have included a part in the book called "Advanced Topics." These topics range from the very edge of research to older, accepted ideas. In particular, the last two chapters deal with Einstein gravity in five dimensions, which has been a hot topic of research in recent years.

On one final note, cosmology has also proven to be a very important testing arena for the general theory of relativity and a large part of the book is therefore devoted to this subject.