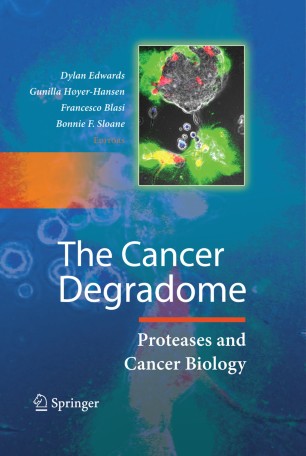 Proteases that act in the extracellular environment have been historically associated with tumorigenesis and metastasis by virtue of their ability to carry out "path-clearing" for cancer cells. In the past few years it has become clear that they also shape the pericellular signaling environment, with profound consequences for cell fate and phenotype in both normal development and disease states. The repertoire of proteases that cells and tissues coordinately regulate in order to modulate their local environment is the DEGRADOME – which in humans is represented by at least 569 proteases in five catalytic classes. "The Cancer Degradome: Proteases in Cancer Biology" , edited by Dylan Edwards, Francesco Blasi, Gunilla-Høyer-Hansen and Bonnie Sloane, covers recent knowledge of the composition of the Degradome, how it can be studied using modern approaches such as transcriptomics and mass spectrometry; how protease activity can be imaged both in vitro and in vivo; how gene knockout mice have improved our knowledge of the roles of proteases in cancer; the links that have emerged between proteolysis and cell signaling; how the Degradome can be a useful source of diagnostic and prognostic markers; and finally new approaches to target proteolysis for therapy.