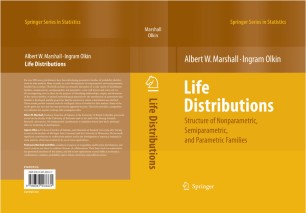 For over 200 years, practitioners have been developing parametric families of probability distributions for data analysis. More recently, an active development of nonparametric and semiparametric families has occurred. This book includes an extensive discussion of a wide variety of distribution families—nonparametric, semiparametric and parametric—some well known and some not. An all-encompassing view is taken for the purpose of identifying relationships, origins and structures of the various families. A unified methodological approach for the introduction of parameters into families is developed, and the properties that the parameters imbue a distribution are clarified. These results provide essential tools for intelligent choice of models for data analysis. Many of the results given are new and have not previously appeared in print. This book provides a comprehensive reference for anyone working with nonnegative data.
Albert W. Marshall, Professor Emeritus of Statistics at the University of British Colombia, previously served on the faculty of the University of Rochester and on the staff of the Boeing Scientific Research Laboratories. His fundamental contributions to reliability theory have had a profound effect in furthering its development.
Ingram Olkin is Professor Emeritus of Statistics and Education at Stanford University, after having served on the faculties of Michigan State University and the University of Minnesota. He has made significant contributions in multivariate analysis and in the development of statistical methods in meta-analysis, which has resulted in its use in many applications.
Professors Marshall and Olkin, coauthors of papers on inequalities, multivariate distributions, and matrix analysis, are about to celebrate 50 years of collaborations. Their basic book on majorization has promoted awareness of the subject, and led to new applications in such fields as economics, combinatorics, statistics, probability, matrix theory, chemistry, and political science.