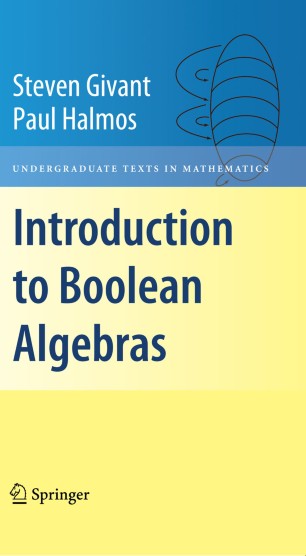 In a bold and refreshingly informal style, this exciting text steers a middle course between elementary texts emphasizing connections with philosophy, logic, and electronic circuit design, and profound treatises aimed at advanced graduate students and professional mathematicians. It is written for readers who have studied at least two years of college-level mathematics. With carefully crafted prose, lucid explanations, and illuminating insights, it guides students to some of the deeper results of Boolean algebra --- and in particular to the important interconnections with topology --- without assuming a background in algebra, topology, and set theory. The parts of those subjects that are needed to understand the material are developed within the text itself.

Highlights of the book include the normal form theorem; the homomorphism extension theorem; the isomorphism theorem for countable atomless Boolean algebras; the maximal ideal theorem; the celebrated Stone representation theorem; the existence and uniqueness theorems for canonical extensions and completions; Tarski’s isomorphism of factors theorem for countably complete Boolean algebras, and Hanf’s related counterexamples; and an extensive treatment of the algebraic-topological duality, including the duality between ideals and open sets, homomorphisms and continuous functions, subalgebras and quotient spaces, and direct products and Stone-Cech compactifications.

A special feature of the book is the large number of exercises of varying levels of difficulty, from routine problems that help readers understand the basic definitions and theorems, to intermediate problems that extend or enrich material developed in the text, to harder problems that explore important ideas either not treated in the text, or that go substantially beyond its treatment. Hints for the solutions to the harder problems are given in an appendix. A detailed solutions manual for all exercises is available for instructors who adopt the text for a course.