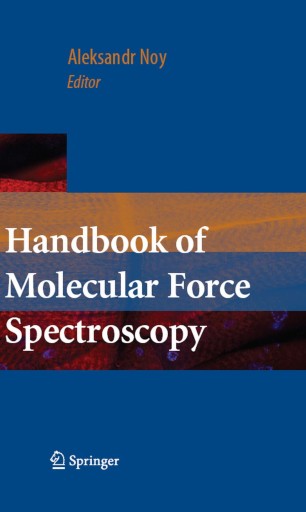 "...Noy's Handbook of Molecular Force Spectroscopy is both a timely and useful summary of fundamental aspects of molecular force spectroscopy, and I believe it would make a worthwhile addition to any good scientific library. New research groups that are entering this field would be well advisedto study this handbook in detail before venturing into the exciting and challenging world of molecular force spectroscopy." Matthew F. Paige, University of Saskatchewan, Journal of the American Chemical Society

Modern materials science and biophysics are increasingly focused on studying and controlling intermolecular interactions on the single-molecule level. Molecular force spectroscopy was developed in the past decade as the result of several unprecedented advances in the capabilities of modern scientific instrumentation, and defines a number of techniques that use mechanical force measurements to study interactions between single molecules and molecular assemblies in chemical and biological systems. Examples of these techniques, which typically target a specific range of experimental systems and geometries, include atomic force microscopy, optical tweezers, surface forces apparatus, and magnetic tweezers.

With contributions by internationally renowned scientists, Handbook of Molecular Force Spectroscopy is a comprehensive, state-of-the-art review of modern force spectroscopy, including fundamentals of intermolecular forces, technical aspects of the force measurements, and practical applications. The Handbook presents reviews of fundamental physical concepts of loading single and multiple chemical bonds on the nanometer scale, covers practical aspects of modern single-molecule level techniques, and describes several representative applications of force spectroscopy to the study of chemical and biological processes. Computer modeling of force spectroscopy experiments is addressed as well. In sum, this volume is an authoritative guide to planning, understanding, and analyzing modern molecular force spectroscopy experiments with an emphasis on biophysical research.

"A series of ten chapters on various aspects of force spectroscopy, each written by an expert in the field. This book … aims ‘to present a series of topics that discuss fundamental concepts and basic methodology used to perform and understand force spectroscopy experiments and illustrate them using examples from current and past research.’ This work would represent a good introduction to the area for anyone wishing to know more about this increasingly important subject. Summing Up: Highly recommended. Upper-division undergraduate through professional collections." (A. Fry, CHOICE, Vol. 45 (10), June, 2008)

"A broad overview of core principles of force spectroscopy is of considerable utility and timeliness. Aleksandr Noy … has done an admirable job of assembling such an overview as well as providing insight into likely new directions of research. … a timely and useful summary of fundamental aspects of molecular force spectroscopy, and I believe it would make a worthwhile addition to any good scientific library. New research groups that are entering this field would be well advised to study this handbook … ." (Matthew F. Paige, Journal of the American Chemical Society, Vol. 130 (26), 2008)

"In this nicely produced volume, one of the subject’s key architects and proponents presents an extremely timely and effective summary of the field. The content is well judged … . Overall, this book represents a very worthwhile and up-to-date introduction to an exciting new field of optics." (Optics and Photonics News, July/August, 2008)