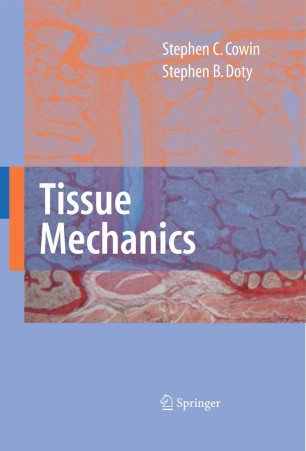 Tissue Mechanics
Stephen C. Cowin and Stephen B. Doty
Tissue Mechanics, Second Edition is about the mechanics of tissues for use at the advanced undergraduate level or above. Tissues transmit mechanical loads just like bridges and building structures. Not only do they transmit loads, but also they adapt their own structures so that the structures will transmit the mechanical loads more effectively, unlike bridges and building structures. The structures of living tissues are continually changing due to growth and response to the tissue environment, including the mechanical environment. The objective of this text is to describe the nature of the composite components of a tissue, the cellular processes that produce these constituents, the assembly of the constituents into a hierarchical structure, and the behavior of the tissue’s composite structure in the adaptation to its mechanical environment. A tissue’s mechanical environment is the history of mechanical loading experienced by the tissue in some reference time period, like a day.
The most important features of the textbook are its middle level, neither too advanced nor too elementary, its fresh perspective on older material issues, and the inclusion of new research results carefully crafted onto this intermediate base of mechanics.
Key Features:
An introductory chapter on the structure of tissues and the fascinating unresolved problems concerning how biological tissues are formed and constructed.
Example problems to provide the student with hands-on experience with concepts
Extensive appendices and tutorial materials on new developments including expanded treatment of ceramic materials and implants
Detailed references for further reading
As in TM, 1E a website (http://tissue-mechanics.com/) that has been established to provide supplemental material for the book. On this website is posted downloadable additional chapters on specific tissues, downloadable PowerPoint presentations of all the book's chapters, corrections to the published volume and additional exercises and examples for the existing chapters.
About the Authors:
Stephen C. Cowin is a City University of New York Distinguished Professor, Departments of Biomedical and Mechanical Engineering, City College of the City University of New York and also an Adjunct Professor of Orthopaedics, at the Mt. Sinai School of Medicine in New York, New York. In 1985 he received the Society of Tulane Engineers and Lee H. Johnson Award for Teaching Excellence and a recipient of the European Society of Biomechanics Research Award in 1994. In 1999 he received the H. R. Lissner medal of the ASME for contributions to biomedical engineering. In 2004 he was elected to the National Academy of Engineering (NAE) and he also received the Maurice A. Biot medal of the American Society of Civil Engineers (ASCE).
Stephen B. Doty is a Senior Scientist at Hospital for Special Surgery, New York, New York and Adjunct Professor, School of Dental and Oral Surgery, Columbia University, New York, NY. He has over 100 publications in the field of anatomy, developmental biology, and the physiology of skeletal and connective tissues. His honors include several commendations for participation in the Russian/NASA spaceflights, the Spacelab Life Science NASA spaceflights, and numerous Shuttle missions that studied the influence of spaceflight on skeletal physiology. He presently is on the scientific advisory board of the National Space Biomedical Research Institute, Houston, Texas.