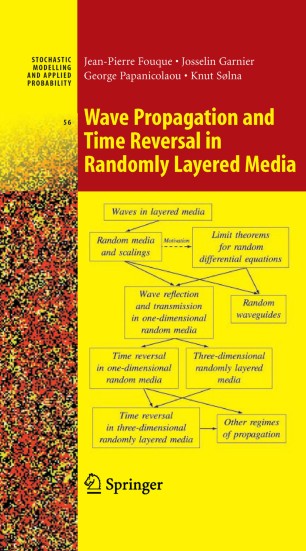 Wave propagation in random media is an interdisciplinary field that has emerged from the need in physics and engineering to model and analyze wave energy transport in complex environments.

This book gives a systematic and self-contained presentation of wave propagation in randomly layered media using the asymptotic theory of ordinary differential equations with random coefficients.

The first half of the book gives a detailed treatment of wave reflection and transmission in one-dimensional random media, after introducing gradually the tools from partial differential equations and probability theory that are needed for the analysis. The second half of the book presents wave propagation in three-dimensional randomly layered media along with several applications, primarily involving time reversal. Many new results are presented here for the first time.

The book is addressed to students and researchers in applied mathematics that are interested in understanding how tools from stochastic analysis can be used to study some intriguing phenomena in wave propagation in random media. Parts of the book can be used for courses in which random media and related homogenization, averaging, and diffusion approximation methods are involved.