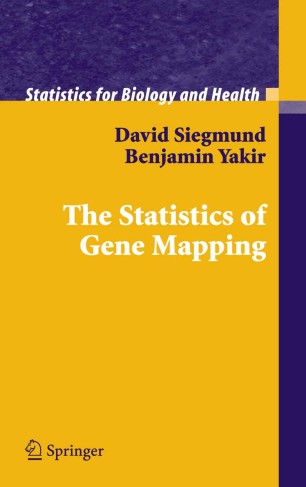 The Statistics of Gene Mapping

Gene mapping is used in experimental genetics to improve the hardiness or productivity of animals or plants of agricultural value, to explore basic mechanisms of inheritance, or to study animal models of human inheritance. In human populations it is used as a first step to identify genes associated with human health and disease. This book presents a unified discussion of the statistical concepts applied in gene mapping, first in the experimental context of crosses of inbred lines and then in outbred populations, primarily humans. The development involves elementary principles of probability and statistics, which are implemented by computational tools based on the R programming language to simulate genetic experiments and evaluate statistical analyses. The viewpoint reflects the modern approach of using anonymous DNA markers distributed throughout the genome to identify regions likely to contain genes of interest.
The reader is assumed to have some familiarity with probability/statistics and with elementary genetics. Important topics are reviewed in the first three chapters. The R programming language is developed in the text. Each chapter contains exercises, both theoretical and computational, some routine and others that are more challenging. The book is suitable for upper level undergraduate students or graduate students of genetics or statistics.