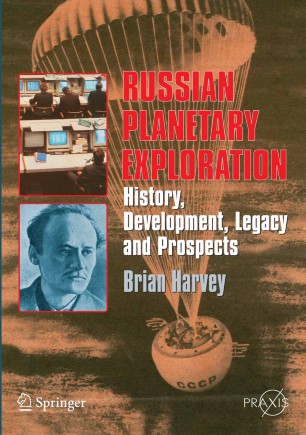 Russia’s accomplishments in planetary space exploration were not achieved easily. Formerly, the USSR experienced frustration in trying to tame unreliable Molniya and Proton upper stages and in tracking spacecraft over long distances. This book will assess the scientific haul of data from the Venus and Mars missions and look at the engineering approaches. The USSR developed several generations of planetary probes: from MV and Zond to the Phobos type. The engineering techniques used and the science packages are examined, as well as the nature of the difficulties encountered which ruined several missions. The programme’s scientific and engineering legacy is also addressed, as well as its role within the Soviet space programme as a whole.

Brian Harvey concludes by looking forward to future Russian planetary exploration (e.g Phobos Grunt sample return mission). Several plans have been considered and may, with a restoration of funding, come to fruition. Soviet studies of deep space and Mars missions (e.g. TMK, Aelita) have much to offer contemporary planners in Europe and the United States. Long-duration ISS and Mir missions provide a medical record of considerable value in constructing human exploration of Mars.

Illustrated with the photographs taken by Soviet Venus and Mars probes, pictures of the spacecraft, diagrams of the flight paths and landing techniques and maps of the landing sites, the book will build on the published scientific papers from the programme, archived material and memoirs and other material coming to light in recent years.