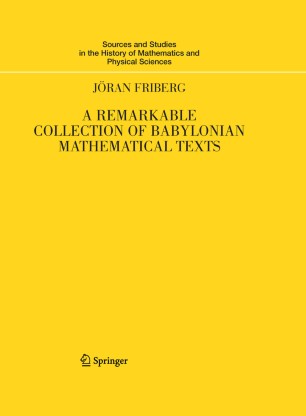 Manuscripts in the Schøyen Collection Cuneiform Texts I

This new text from Jöran Friberg, the leading expert on Babylonian mathematics, presents 130 previously unpublished mathematical clay tablets from the Norwegian Schøyen collection, and provides a synthesis of the author's most important work. Through a close study of these tablets, Friberg has made numerous amazing discoveries, including the first known examples of pre-Classical labyrinths and mazes, a new understanding of the famous table text Plimpton 322, and new evidence of Babylonian familiarity with sophisticated mathematical ideas and objects, such as the three-dimensional Pythagorean equation and the icosahedron.

In order to make the text accessible to the largest possible audience, the author has included an introductory chapter entitled, "How to get a better understanding of mathematical cuneiform texts." Throughout the text he avoids anachronisms and makes every effort to teach the reader to do the same. The approach in this book is inherently pedagogical, as Friberg illustrates all the steps of the process of interpretation and clearly explains the mathematical ideas, including terminology, metrological systems, and methods of calculation. Drawings and color photos of a large selection of tablets are also included. Particularly beautiful hand copies of the most complicated texts were made by Farouk Al-Rawi, professor of Ancient Languages and Archaeology at Baghdad University.

While the book is reader-friendly, it remains as detailed and exhaustive as possible. It is the most comprehensive treatment of a set of Babylonian mathematical texts ever published and will open up this subject to a new generation of students, mathematicians, and historians of science.