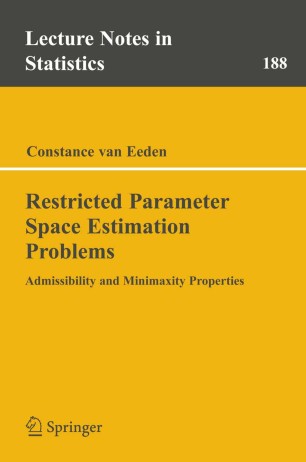 This monograph contains a critical review of 50 years of results on questions of admissibility and minimaxity of estimators of parameters that are restricted to closed convex subsets of Rk . It presents results of approximately 300 mostly-published papers on the subject, and points out relationships between them as well as open problems. The book does not touch on the subject of testing hypotheses for such parameter spaces. It does give an overview of known algorithms for computing maximum likelihood estimators under order-restrictions.

The book should be valuable as a reference for researchers and graduate students looking for what is known and unknown in the area of restricted parameter-space-estimation. It assumes a good knowledge of decision theory.

Constance van Eeden is Professeur émérite at the Université de Montréal, Honorary Professor at The University of British Columbia, and Professeure associée at the Université du Québec à Montréal. She previously held appointments at the Centrum voor Wiskunde en Informatica (1951–1960), Michigan State University (1960–1961), University of Minnesota (1961–1965), and Université de Montréal (1965–1989). She was a General Editor of Statistical Theory and Method Abstracts (1990–2004) and Associate Editor of the Annals of Statistics (1974–1977), The Canadian Journal of Statistics (1980–1994) and Annales des sciences mathématiques du Québec (1986–1998). She is a reviewer for Mathematical Reviews and a member of the Noether Award Committee. The Statistical Society of Canada awarded her their Gold Medal in 1990 and the Département de mathématiques et de statistique at the Université de Montréal named their yearly prize for the best-finishing undergraduate student in actuarial studies or statistics, the Prix Constance-van-Eeden. She is a Fellow of the Institute of Mathematical Statistics and of the American Statistical Association, and an Elected Member of the International Statistical Institute. She (co-)authored 66 papers in refereed journals, as well as two books and (co-)supervised 14 PhD and 19 MSc students.