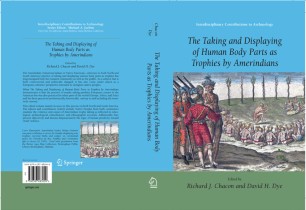 Part of the INTERDISCIPLINARY CONTRIBUTIONS TO ARCHAEOLOGY book series (IDCA)

The Amerindian (American Indian or Native American – reference to both North and South America) practice of taking and displaying various body parts as trophies has long intrigued both the research community as well as the public. As a subject that is both controversial and politically charged, it has also come under attack as a European colonists’ perspective intended to denigrate native peoples.

What this collection demonstrates is that the practice of trophy-taking predates European contact in the Americas but was also practiced in other parts of the world (Europe, Africa, Asia) and has been practiced prehistorically, historically and up to and including the twentieth century.

This edited volume mainly focuses on this practice in both North and South America. The editors and contributors (which include Native Peoples from both continents) examine the evidence and causes of Amerindian trophy taking as reflected in osteological, archaeological, ethnohistoric and ethnographic accounts. Additionally, they present objectively and discuss dispassionately the topic of human proclivity toward ritual violence.