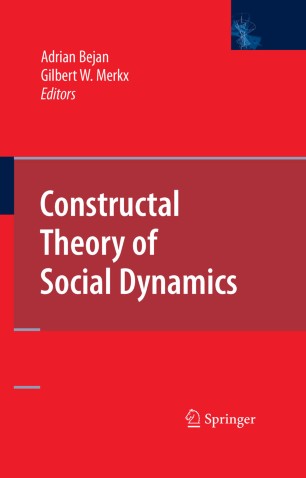 Constructal Theory of Social Dynamics brings together for the first time social scientists and engineers to develop a predictive theory of social organization, as a conglomerate of mating flows that morph in time to flow more easily (people, goods, money, energy, information). These flows have objectives (e.g., minimization of effort, travel time, cost), and the objectives clash with global constraints (space, time, resources). The result is organization (flow architecture) derived from one principle of configuration evolution in time (the constructal law): "for a flow system to persist in time, its configuration must morph such that it provides easier access to its streams."

Constructal theory predicts animal design and geophysical flows, and makes evolution a part of physics. In the social sciences, there is substantial literature based on the use of optima to deduce social, population and economic dynamics. The constructal approach of this book links social sciences with physics, biology and engineering. The book explores the deterministic principle that generates a broad array of patterned phenomena, in demography, geography, communications, hierarchy, and multiple scales. Examples are the distribution of living settlements, the occurrence of flow structure inside each settlement, ‘development’ as the relation between fast-flowing societies and advancement and wealth, migration patterns, and globalization.

Constructal Theory of Social Dynamics is novel and important because it puts the occurrence of social organization on a scientific basis. It brings social organization under the same physics principle that accounts for the generation of flow architecture (design) in geophysical flows, animal design, and engineered flows. This exploratory work adds a dose of determinism to the modeling and predicting of societal flows.