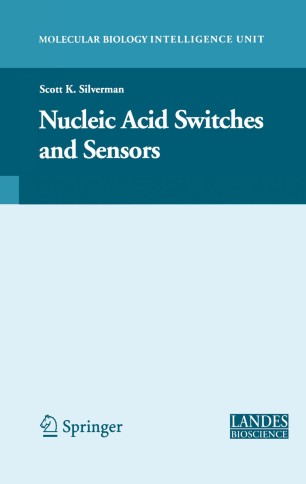 In this book, seven chapters describe studies aimed at understanding and exploiting the key features of such molecular RNA and DNA devices. In the first section of the book, four chapters are devoted to artificial nucleic acid switches and sensors. These chapters introduce the concept of allosteric ribozymes as molecular switches and sensors; describe nucleic acid enzymes that are switched by oligonucleotides and other nucleic acid enzymes that are switched by proteins; and illustrate how switching elements can be integrated ration-ally into fluorescently signaling molecular sensors made out of nucleic acids. In the second section of the book, three chapters show that nature has been as crafty a molecular-scale engineer as any modern scientist via evolution of natural nucleic acid switches and sensors. RNAs have been found whose activities are modulated either by proteins or by small-molecule metabolites, and both kinds of system are described. Finally, the notion of exploiting naturally occurring RNA switches for drug development is discussed.