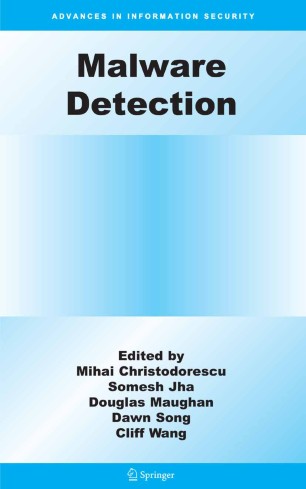 Many malicious attacks are achieved by malicious code or malware, such as viruses and worms. Shared resources, such as the Internet, have created a highly interconnected cyber-infrastructure. Critical infrastructures in domains such as medical, power, telecommunications, and finance are highly dependent on information systems. These two factors have exposed our critical infrastructures to malicious attacks and accidental failures. Given the deleterious affects of malware on our cyber infrastructure, identifying malicious programs is an important goal. Unfortunately, malware detectors have not kept pace with the evasion techniques commonly used by hackers--the good guys are falling behind in the arms race.

Malware Detection, based on the Special ARO/DHS Workshop on Malware Detection at Rosslyn, VA, in 2005, captures the state of the art research in the area of malicious code detection, prevention and mitigation.

This edited volume is intended for researchers and developers working on malicious code (malware) detection, prevention and mitigation. In addition it can be used for a senior level undergraduate course, or for a graduate course in the area of computer and software security.