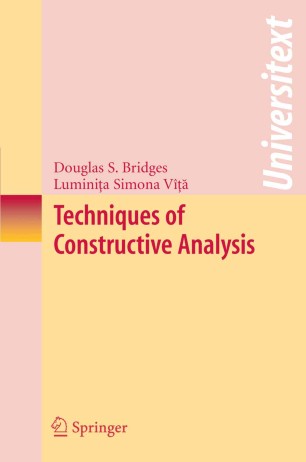 This text provides a rigorous, wide-ranging introduction to modern constructive analysis for anyone with a strong mathematical background who is interested in the challenge of developing mathematics algorithmically. The authors begin by outlining the history of constructive mathematics, and the logic and set theory that are used throughout the book. They then present a new construction of the real numbers, followed by the fundamentals of the constructive theory of metric and normed spaces; the lambda-technique (a special method that enables one to prove many results that appear, at first sight, to be nonconstructive); finite- dimensional and Hilbert spaces; and convexity, separation, and Hahn-Banach theorems. The book ends with a long chapter in which the work of the preceding ones is applied to operator theory and other aspects of functional analysis. Many results and proofs, especially in the later chapters, are of relatively recent origin.

The intended readership includes advanced undergraduates, postgraduates, and professional researchers in mathematics and theoretical computer science. With this book, the authors hope to spread the message that doing mathematics constructively is interesting and challenging, and produces new, deep computational information.