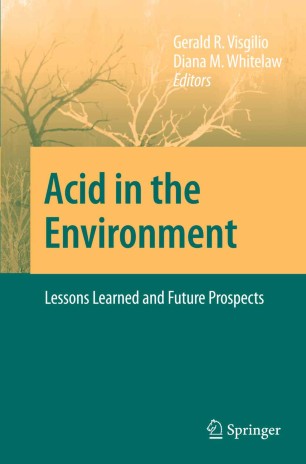 Acid in the Environment

Acid deposition is a large scale, long term environmental problem with more significant ecological impacts than previously anticipated. Today we recognize that resolution involves a perplexing set of policy issues, since the sources of pollution are often hundreds of miles away, and can only be accomplished through international cooperation, often at a global scale. Acid in the Environment: Lessons Learned and Future Prospects is a collection of essays that blends the research findings and the policy analyses of individuals from different academic disciplines with the positions advanced by representatives of NGOs.

In Part I: Ecological Impacts of Acid Deposition, scientists emphasize the web of changes in complex ecosystems caused by sulfur dioxide and nitrogen oxides. Analyses of domestic and international policies to control the emission of pollutants that cause acid rain are discussed in Part II: Acid Emissions Energy and Policy. The authors of Part III: Sulfur Dioxide and the Market provide the reader with an economic perspective on the control of sulfur dioxide emissions. The volume concludes with Part IV: Lessons Learned and Future Prospects, which reveals the acid deposition problem has served as a testing ground for applying scientific insights to public policy, forging international agreements and creating economically effective mechanisms to solve environmental problems. The rapid progress in reducing sulfur dioxide emissions in both North America and Europe is promising, and provides a good model for regions in eastern Asia where these emissions are growing fast.

Acid in the Environment: Lessons Learned and Future Prospects presents a broad approach to the study of acid deposition, exposing readers with a scientific background to significant policy issues and those with a policy orientation to important ecological impacts. The book raises important questions that will serve as a springboard for discussion between diverse groups of teachers and students, concerned citizens and legislators, and scientists and policy makers.