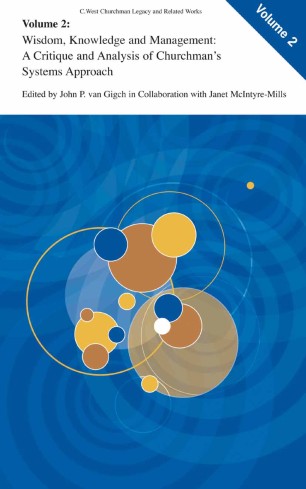 A Critique and Analysis of Churchman’s Systems Approach

In Wisdom, Knowledge, and Management, the 2nd volume of the series: Churchman’s Legacy and Related Works, the editors draw contributions from leading systems thinkers inspired by the works of C West Churchman.

The Systems Approach and Its Enemies (C. West Churchman, 1979) is one of Churchman’s most significant works. In this particular writing he displayed two main tendencies, that he was a Skeptic and that he showed Socratic Wisdom. In Wisdom, Knowledge, and Management, the editors seeks to follow up on these two themes and reveal how modern authors interpret Churchman’s ideas, apply them to their own line of thinking and develop their own brand of Systemics.

Finally, we would like to note that one theme of this volume is to relate modern authors, and in particular Churchman, to ideas spawned two thousands years ago among the Ancient Greeks.

This effort should show the reach of Churchman’s intellectual power and demonstrates cross-fertilization across borders and continents. It could not have happened without the Internet.

John P. van Gigch is the Series Editor for the Book Series Churchman’s Legacy and Related Works which he was instrumental in getting started. van Gigch knew West Churchman as well as his family personally. Churchman wrote an Introduction for van Gigch’s Applied General System Theory which was published in 1974, with a Second Edition in 1978. van Gigch remained close to West Churchman after the latter retired from the University of California-Berkeley. Right to the end, they celebrated several of West’s birthdays together.