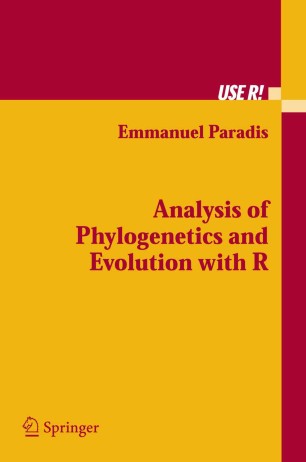 Analysis of Phylogenetics and Evolution with R

Part of the Use R book series (USE R)

The increasing availability of molecular and genetic databases coupled with the growing power of computers gives biologists opportunities to address new issues, such as the patterns of molecular evolution, and re-assess old ones, such as the role of adaptation in species diversification.

This book integrates a wide variety of data analysis methods into a single and flexible interface: the R language. This open source language is available for a wide range of computer systems and has been adopted as a computational environment by many authors of statistical software. Adopting R as a main tool for phylogenetic analyses will ease the workflow in biologists' data analyses, ensure greater scientific repeatability, and enhance the exchange of ideas and methodological developments.

Graduate students and researchers in evolutionary biology can use this book as a reference for data analyses, whereas researchers in bioinformatics interested in evolutionary analyses will learn how to implement these methods in R. The book starts with a presentation of different R packages and gives a short introduction to R for phylogeneticists unfamiliar with this language. The basic phylogenetic topics are covered: manipulation of phylogenetic data, phylogeny estimation, tree drawing, phylogenetic comparative methods, and estimation of ancestral characters. The chapter on tree drawing uses R's powerful graphical environment. A section deals with the analysis of diversification with phylogenies, one of the author's favorite research topics. The last chapter is devoted to the development of phylogenetic methods with R and interfaces with other languages (C and C++). Some exercises conclude these chapters.

Emmanuel Paradis is an evolutionary biologist at the Centre National de la Recherche Scientifique (CNRS) and the Institut de Recherche pour le Développement (IRD) in Montpellier. He received his Doctorate Diploma in population biology and ecology in 1993 at the University of Montpellier II. He has conducted empirical and theoretical research on birds, mammals, and fish. He worked at the British Trust for Ornithology for three years and at the Institut des Sciences de l'Évolution in Montpellier for seven years where he developed most of the ideas presented in this book. He is the main author and maintainer of the R package APE (Analysis of Phylogenetics and Evolution).