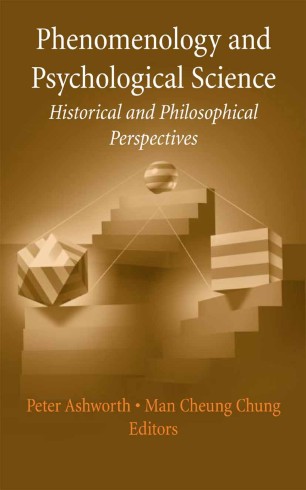 Part of the History and Philosophy of Psychology book series (HPPS)

Phenomenological studies of human experience are a vital component of caring professions such as counseling and nursing, and qualitative research has had increasing acceptance in American psychology. At the same time, the debate continues over whether phenomenology is legitimate science, and whether qualitative approaches carry any empirical validity.

Ashworth and Chung’s Phenomenology and Psychological Science places phenomenology firmly in the context of psychological tradition. And to dispel the basic misconceptions surrounding this field, the editors and their seven collaborators trace the evolution of phenomenological philosophy (including the work of Sartre and Heidegger) and its parallel impact on psychological science, revealing key points of compatibility:

The unique presentation of its subject makes this volume a source of considerable interest for readers involved in theoretical and historical psychology. It will also prove to be important reading for the professional or advanced student concerned with the search for meaning that unites philosophy and psychology.

Dr Peter Ashworth is a professor of educational research at Sheffield Hallam University. Throughout his professional life a special concern has been the development of psychological methods based on existential-phenomenological thinking. He chaired the 18th International Human Science Research Conference in 1999. His substantive research has been largely in education and health; he has published four books and over forty research papers. He is currently working on a critique of the ‘approaches to study’ literature in Higher Education and developing a phenomenological alternative which emphasises the personal life world of the student. He is a Fellow of the British Psychological Society.

Dr Man Cheung Chung is a Reader of Psychology in the Clinical Psychology Teaching Unit, School of Applied Psychosocial Studies at the University of Plymouth. His research interests include philosophy of psychology and health/clinical psychology. He has published some 100 articles and chapters in the foregoing areas as well as on other diverse topics. In addition to the present book, he has also edited Psychoanalytic Knowledge with Colin Feltham (Palgrave Macmillan, 2003), Psychology of Reasoning with Ken Manktelow (Psychology Press, 2004) and Reconceiving Schizophrenia with Bill Fulford and George Graham (Oxford University Press, forthcoming).