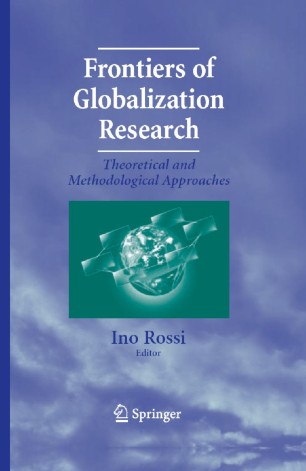 For more than twenty years globalization has been a prominent topic in the social sciences and humanities because it deals with processes that impact all societies at the international, national, and local levels. Controversies and conflicting approaches have dominated this field of studies. To understand the variety and strength of different approaches, the editor asked many of their leading exponents to outline their own "research framework”.

"Ino Rossi has assembled a stimulating collection of insightful essays by many of the world’s leading analysts of globalization. The essays more than live up to the book’s title, and the critical commentaries included in the volume, by the editor and other widely renowned contemporary social theorists, add a welcome dialogical dimension to the work. This is first-rate scholarship that merits careful reading by a wide audience.” —John Boli, Professor and Chair, Department of Sociology, Emory University, Atlanta, GA

"Many of the scholars in this volume were writing about political, social, and economic change from a global perspective long before the term ‘globalization’ became so widely used. It is very useful to have their recent thoughts as well as that of some younger experts about where the world is going, and how to study this, all combined in a single, fascinating book.” —Daniel Chirot, University of Washington, Seattle, WA

"Rossi has assembled an array of leading experts to dissect globalization’s realities and myths. Globalization emerges as a multi-dimensional process, structurally uneven, with deep measures of continuity and discontinuity from what went before. The global frontier has rarely been so penetratingly explored.” —Randall Collins, University of Pennsylvania

"In a compelling volume, pioneers who shaped globalization studies now take a fresh look at the field. This series of reflections deepens analysis and will help map research for many years to come.” —James H. Mittelman, Professor of International Relations, American University, Washington, DC, and Vice President of the International Studies Association