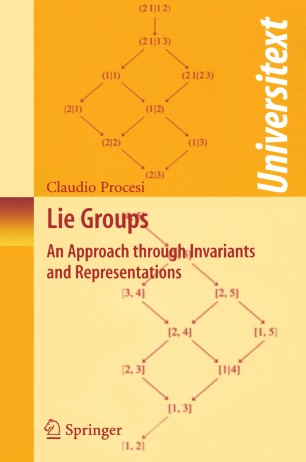 An Approach through Invariants and Representations

Lie groups has been an increasing area of focus and rich research since the middle of the 20th century. Procesi's masterful approach to Lie groups through invariants and representations gives the reader a comprehensive treatment of the classical groups along with an extensive introduction to a wide range of topics associated with Lie groups: symmetric functions, theory of algebraic forms, Lie algebras, tensor algebra and symmetry, semisimple Lie algebras, algebraic groups, group representations, invariants, Hilbert theory, and binary forms with fields ranging from pure algebra to functional analysis.

Key to this unique exposition is the large amount of background material presented so the book is accessible to a reader with relatively modest mathematical background. Historical information, examples, exercises are all woven into the text.

Lie Groups: An Approach through Invariants and Representations will engage a broad audience, including advanced undergraduates, graduates, mathematicians in a variety of areas from pure algebra to functional analysis and mathematical physics.