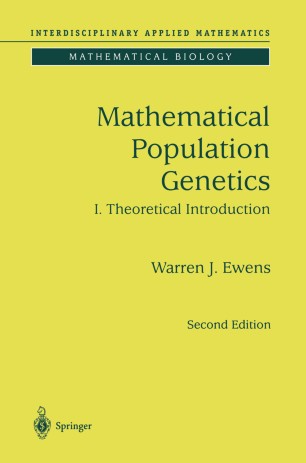 Population genetics occupies a central role in a number of important biological and social undertakings. It is fundamental to our understanding of evolutionary processes, of plant and animal breeding programs, and of various diseases of particular importance to mankind. This is the first of a planned two-volume work discussing the mathematical aspects of population genetics, with an emphasis on the evolutionary theory. This first volume draws heavily from the author's classic 1979 edition since the material in that edition may be taken, to a large extent, as introductory to the contemporary theory. It has been revised and expanded to include recent topics that follow naturally from the treatment in the earlier edition, e.g., the theory of molecular population genetics and coalescent theory.

This book will appeal to graduate students and researchers interested in theoretical population genetics and evolution.

Reviews of the first edition:
Ewens book will be an important reference to anyone interested in the mathematical aspects of population genetics, not only to those actually doing it, but also to anyone trying to bridge the now substantial gap between theoretical and experimental population genetics.

This book is an excellent combination of an introduction to population genetics theory for a mathematically sophisticated reader, together with a survey of current work in the field.