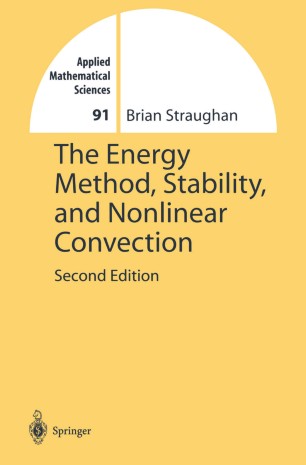 This book describes the energy method, a powerful technique for deriving nonlinear stability estimates in thermal convection contexts. It includes a very readable introduction to the subject (Chapters 2-4), which begins at an elementary level and explains the energy method in great detail, and also covers the current topic of convection in porous media, introducing simple models and then showing how useful stability results can be derived. In addition to the basic explanation, many examples from diverse areas of fluid mechanics are described. The book also mentions new areas where the methods are being used, for example, mathematical biology and finance. Several of the results given are published here for the first time.

This volume is a completely revised version of the first edition published in 1992. In addition to an update of material from the first edition, six new chapters have been added, covering topics such as multi-component convection-diffusion, convection flows in a compressible fluid, models of penetrative convection, convection with temperature-dependent viscosity and thermal conductivity, and stability of ocean flows. The final chapter gives details of two very different but highly accurate and efficient methods for numerically solving eigenvalue problems that arise in hydrodynamic stability.

The new methods developed during the last eleven years and presented here will be of use to many readers in applied mathematics, engineering, physics, and other mathematical disciplines.