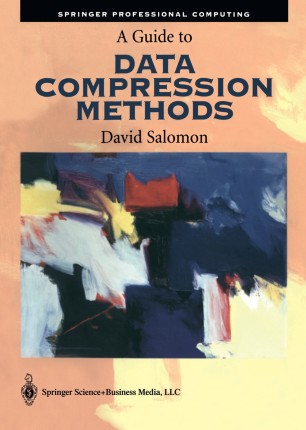 A Guide to Data Compression Methods

In 1829, Louis Braille, a young organist in a Paris church, blind since age 3, invented the well-known code for the blind, still in common use today all over the world and named after him. Braille himself modified his code in 1834, and there have been several modifications since. However, the basic design of this code, where each character is represented by a group of 3 x 2 dots, has remained intact. The dots are embossed on thick paper and each can be raised or flat (i. e. , present or absent). Each dot is therefore equivalent to one bit of information. As a result, the Braille code (Figure 1) is a 6-bit code and can therefore represent 64 symbols (the code of six flat dots indicates a blank space). Braille's followers extended the capabilities of his code in several ways. One im­ portant extension is contractions. These are letters that, when they stand alone, mean words. For example, the letter "b" standing alone (or with punctuation) means the word "but," the letter "e" standing alone means "every," and "p" means "people. " Another extension is short-form words. These are combinations of two or more codes that mean an entire word (short-form words may contain contractions). For example, "ab" means "about," "rcv" means "receive," and "(the)mvs" means "themselves. " (The "the" in parentheses is a contraction, dots 2-3-4-6. ) Figure 2 shows some examples of these special codes.