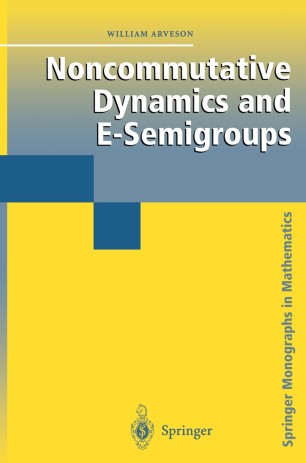 The term Noncommutative Dynamics can be interpreted in several ways. It is used in this book to refer to a set of phenomena associated with the dynamics of quantum systems of the simplest kind that involve rigorous mathematical structures associated with infinitely many degrees of freedom. The dynamics of such a system is represented by a one-parameter group of automorphisms of a noncommutative algebra of observables, and the author focuses primarily on the most concrete case in which that algebra consists of all bounded operators on a Hilbert space.

This subject overlaps with several mathematical areas of current interest, including quantum field theory, the dynamics of open quantum systems, noncommutative geometry, and both classical and noncommutative probability theory. This is the first book to give a systematic presentation of progress during the past fifteen years on the classification of E-semigroups up to cocycle conjugacy. There are many new results that cannot be found in the existing literature, as well as significant reformulations and simplifications of the theory as it exists today.

William Arveson is Professor of Mathematics at the University of California, Berkeley. He has published two previous books with Springer-Verlag, An Invitation to C*-algebras (1976) and A Short Course on Spectral Theory (2001).