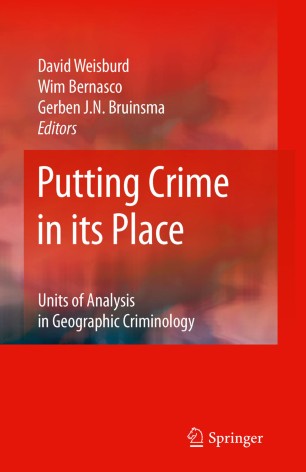 Putting Crime in its Place

Units of Analysis in Geographic Criminology

Putting Crime in its Place: Units of Analysis in Geographic Criminology focuses on the units of analysis used in geographic criminology. While crime and place studies have been a part of criminology from the early 19th century, growing interest in crime places over the last two decades demands critical reflection on the units of analysis that should form the focus of geographic analysis of crime. Should the focus be on very small units such as street addresses or street segments, or on larger aggregates such as census tracts or communities? Academic researchers, as well as practical crime analysts, are confronted routinely with the dilemma of deciding what the unit of analysis should be when reporting on trends in crime, when identifying crime hot spots or when mapping crime in cities. In place-based crime prevention, the choice of the level of aggregation plays a particularly critical role. This peer reviewed collection of essays aims to contribute to crime and place studies by making explicit the problems involved in choosing units of analysis in geographic criminology. Written by renowned experts in the field, the chapters in this book address basic academic questions, and also provide real-life examples and applications of how they are resolved in cutting-edge research. Crime analysts in police and law enforcement agencies as well as academic researchers studying the spatial distributions of crime and victimization will learn from the discussions and tools presented.

David Weisburd is Walter E. Meyer Professor of Law and Criminal Justice and Director of the Institute of Criminology at the Hebrew University Faculty of Law, and Distinguished Professor of Administration of Justice at George Mason University.  He is an elected  Fellow of the American Society of Criminology and of the Academy of Experimental Criminology.  He is also Co-Chair of the steering committee of the Campbell Collaboration Crime and Justice Group, a member of the Harvard University/National Institute of Justice Executive Session in Policing, and of the National Research Council Committee on Crime, Law and Justice.  Professor Weisburd has a long interest in Crime and Place studies beginning with his involvement in a series of experimental studies of police interventions at crime places, including the Minneapolis Hot Spots Experiment, the Jersey City Drug Market Analysis Experiment and the Jersey City Violent Crime Hot Spots Experiment.  Professor Weisburd is presently working on a book with Liz Groff and SueMing Yang that explores the varying factors that explain variation in developmental trends of crime at micro places over time that will be published by Oxford University Press. Professor Weisburd is author or editor of fifteen books and more than eighty scientific articles.

Wim Bernasco studied social psychology at Leiden University, and obtained a PhD in sociology at Utrecht University. His PhD thesis explored the interrelated nature of the occupational careers of spouses. Before joining the NSCR in 2000, he worked in different positions at various universities and at the research center of the Ministry of Justice. His current work focuses on spatial aspects of criminal activities, a broad area that encompasses a number of research questions. What drives variation in crime and delinquency between neighborhoods? Which effects do physical and social barriers have on offender travel behavior? How do offenders search and select their targets and methods? Do they offend in the communities where they used to live? Is crime spatially displaced when criminal opportunities are blocked? What causes repeat victimization? Does the risk of criminal victimization communicate spatially, and why? Wim explores many of these themes in collaboration with researchers from the United Kingdom, Australia and the United States. His recent international publications appear in Criminology, Journal of Quantitative Criminology, British Journal of Criminology, European Journal of Criminology, Crime Psychology & Law, and Journal of Investigate Psychology and Offender Profiling.

Prof. dr. Gerben J.N. Bruinsma, born in The Hague, studied sociology and criminology at Utrecht University. After his graduation in 1975 he became lecturer of criminology and penology at the Criminological Institute of the Radboud University Nijmegen. In 1981 he left for the Faculty of Public Administration and Public Policy at Twente University at Enschede. In 1985 he was appointed as associate professor in methodology and research methods. In the same year he finished his doctoral dissertation ‘Crime as a social process. A test of the differential association theory in the version of K-D. Opp’. He was co-founder and director of the International Police Institute at the University of Twente and in 19995 he was appointed as professor of criminology at that university. From 1999 he has been director of the Netherlands Institute for the Study of Crime and Law Enforcement (NSCR), a national research institute of the National Organization for Scientific Research (NWO) and professor of criminology of the faculty of Law of Leiden University. He has been editor of various journals and had a great number of advisory and board positions in the field. He published more than 90 articles and 30 books on criminological issues like criminological theory, juvenile delinquency, policing, organized crime and, geographical criminology.