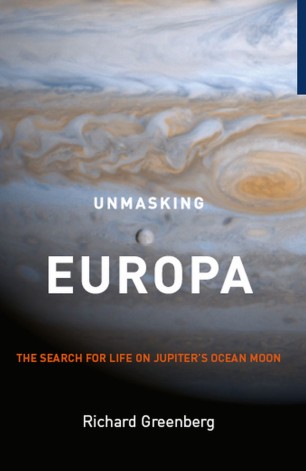 The Search for Life on Jupiter’s Ocean Moon

In Unmasking Europa, Richard Greenberg tells the story of how he and his team of researchers came to believe that the surface of Europa is in fact a crust so thin and active that it can barely hide an ocean of liquid water below. He shows how this ocean is warmed by the friction of tidal movements in this small moon as it revolves while at the same time orbiting immense Jupiter, and how those tides drive all the activity in evidence on the surface. The implications of this interpretation—which includes the idea that there are active intermittent openings from the liquid ocean to the frozen surface—are immense. The warmth, the chemistry, and the connections from ocean to surface provide the conditions necessary for the existence of life, even at this relatively remote locale in our solar system, far beyond what’s normally thought of as its "habitable zone."

Unmasking Europa describes in clear but technically accurate terms—and with extensive illustrations (including more than 100 NASA mission images)—the remarkable history of research on Europa over the last four decades. The book also provides unique insights into how "big science" gets done today, and it is not always a pretty picture. From his perspective as a Professor of Planetary Sciences at the University of Arizona, and a quarter-century-long membership on the Imaging Team for the Galileo space mission, Greenberg describes how personal agendas (including his own) and political maneuvering (in which he received an education by fire) determined a lot about the funding, staffing, and even the direction of research about Europa.

While he is satisfied that his team’s work is now, finally, receiving fair consideration and even respect, Greenberg comes away from his decades-long experience feeling that something is fundamentally wrong with the scientific enterprise as a whole because it routinely punishes innovation, risk-taking thought, and a willingness to simply let the evidence lead where it may. In today’s scientific culture, with its careerist pressures and peer-reviewed propriety, Greenberg believes, astute scientists (and sadly many of our youngest and brightest scientists) quickly realize that the most rewarding research strategy is to stay within the mainstream—a tendency that by its very nature is at odds with the ideals of scientific investigation and thought.