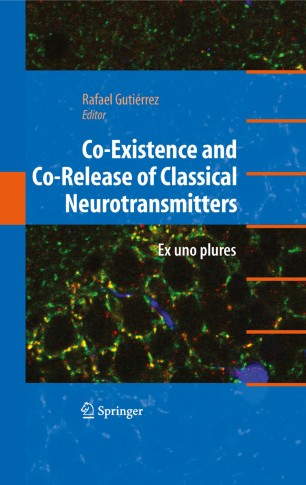 Co-Existence and Co-Release of Classical Neurotransmitters

Until recently, many neuroscientists were skeptical of the idea that classical neurotransmitters could be co-released from neurons. It is now common knowledge, though, that the "one neuron, one neurotransmitter" postulate is the exception rather than the rule. Co-Existence and Co-Release of Classical Neurotransmitters provides readers with a comprehensive overview of research from the worldâ€™s leading neuroscience authors, all of whom have discovered and studied the co-existence or co-release of several pairs of neurotransmitters in neural networks. Their reviews include novel aspects of transmitter combinations, such as NA-ACh, monoamines-glutamate, ACh-glutamate, cross-talk between monoamines, GABA and ATP, and various combinations of aminoacid transmitters.

Co-Existence and Co-Release of Classical Neurotransmitters will be particularly useful to neuroscience graduate students, academics, and researchers in synaptic physiology and synaptic plasticity. This book is the first of its kind to center on the timely issue of co-release of neurotransmitters, and serves as an important contribution to the re-consideration of this idea in other brain regions.

Dr. Rafael Gutiérrez was among the first to study the physiological impact of the co-existence of glutamate and GABA in the hippocampus, particularly the developmental and activity-dependent expression of GABAergic markers in granule cells. Since 1997, Dr. Gutiérrez has been a professor of neurosciences at the Center for Research and Advanced Studies (CINVESTAV) in Mexico City. He recieved his PhD in Neurosciences from the National University of Mexico in 1993 and, under the prestigious Alexander von Humboldt Research Scholarship, worked for three years with pathophysiology expert Uwe Heinemann in Germany.