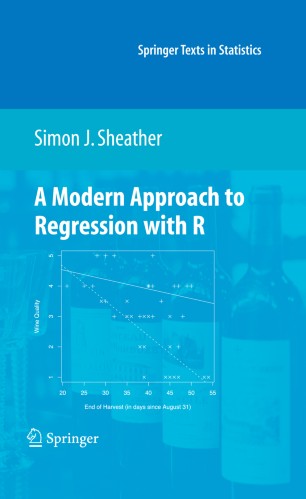 A Modern Approach to Regression with R

A Modern Approach to Regression with R focuses on tools and techniques for building regression models using real-world data and assessing their validity. A key theme throughout the book is that it makes sense to base inferences or conclusions only on valid models.

The regression output and plots that appear throughout the book have been generated using R. On the book website you will find the R code used in each example in the text. You will also find SAS-code and STATA-code to produce the equivalent output on the book website. Primers containing expanded explanations of R, SAS and STATA and their use in this book are also available on the book website.

The book contains a number of new real data sets from applications ranging from rating restaurants, rating wines, predicting newspaper circulation and magazine revenue, comparing the performance of NFL kickers, and comparing finalists in the Miss America pageant across states.

One of the aspects of the book that sets it apart from many other regression books is that complete details are provided for each example. The book is aimed at first year graduate students in statistics and could also be used for a senior undergraduate class.

Simon Sheather is Professor and Head of the Department of Statistics at Texas A&M University. Professor Sheather’s research interests are in the fields of flexible regression methods and nonparametric and robust statistics. He is a Fellow of the American Statistical Association and listed on ISIHighlyCited.com.