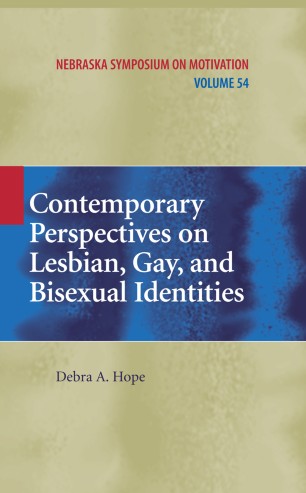 The scientific study of sexual identity has made great strides in the five decades since Kinsey’s early investigations.; We know that sexual orientation exists on a continuum and not within a list of static categories such as "straight" and "gay", yet it’s not always clear what should be measured, or what should "count." It’s understood that sexual orientation is an intricate blend of sexual attraction, behavior, and identity, but it can also be informed by political identity, social behavior, and nuances of attraction that may possibly transcend sex.

However one defines sexuality, Contemporary Perspectives on Lesbian, Gay, and Bisexual Identities relates these concepts to larger societal issues while also highlighting critical grey areas in the knowledge base, from the psychobiology of desire to the fluidity of adolescent sexual experience and self-expression. Well-known scholars in the psychology of sexual orientation:

Contemporary Perspectives on Lesbian, Gay, and Bisexual Identities is especially timely during this current crossroads of social and political acceptance, and is thought-provoking, influential reading for researchers, practitioners working with sexual minorities, and policymakers.

About the Nebraska Symposium on Motivation
The Nebraska Symposium on Motivation has been sponsored by the Department of Psychology at the University of Nebraska-Lincoln since 1953. Each year the Symposium invites leading scholars from around the world to speak at a conference devoted to a topic of current interest to psychology, the proceedings of which are published in an edited volume.