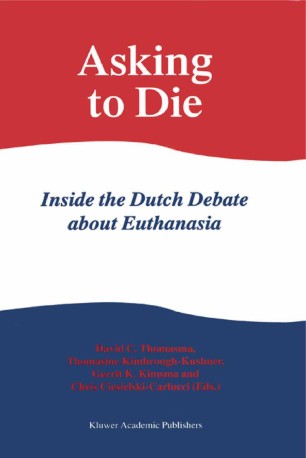 Asking to Die: Inside the Dutch Debate about Euthanasia

claim was that he had faced a conflict of duties pitting his legal duty not to kill against his duty as a physician to relieve his patient’s unbearable suffering. He was acquitted on the important grounds of conflict of duty. These grounds are based on a concept in Dutch law called "force majeure" 4 which recognizes extenuating circumstances such as conflicts of duty. The acquittal was upheld by the Lower Court of Alkmaar, but revoked by an Amsterdam court of appeal. The case went on to the Supreme Court, but before the Supreme Court's decision was issued, the Royal Dutch Medical Association (RDMA) attempted to clarify the criteria for euthanasia that many within the profession already accepted. The RDMA proposed that physicians be permitted to perform euthanasia provided that a set of procedures had been met. Variously stated, the guidelines contain the following central provisions: Voluntary, competent, explicit, and persistent requests on the part of the • patient; Requests based on full information; • The patient is in a situation of intolerable and hopeless suffering (either • physical or mental); No further acceptable alternatives to euthanasia. All alternatives • acceptable to the patient for relief of suffering having been tried; Consultation with at least one other physician whose judgment can be • 5 expected to be independent. Indirectly, these guidelines became the criteria prosecutors used to decide whether or not to bring charges.