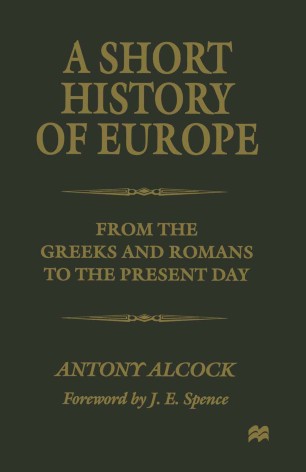 A Short History of Europe

From the Greeks and Romans to the Present Day

'Antony Alcock's A Short History of Europe offers a straightforward, meticulously researched account; one which provides the student with clear and detailed analysis. Future generations of undergraduates and postgraduates alike will have cause to be grateful for a stimulating introduction to a major area of European studies.' - J.E. Spence, Associate Fellow, Royal Institute of International Affairs Alcock examines the historical development of Europe from the Greek city states through to the 1992 Maastricht Treaty on European integration. He also analyses: the rise of Christianity, the contributions of the Roman and Byzantine Empires, the rivalry between the Papacy and Holy Roman Empire, and the consequences for the rise of states, European domination of the world following the voyages of discovery, continental royal absolutism and British political liberty, the impacts of the French and Industrial Revolutions, the two world wars, the integration process since 1945 and the collapse of the Soviet Union.