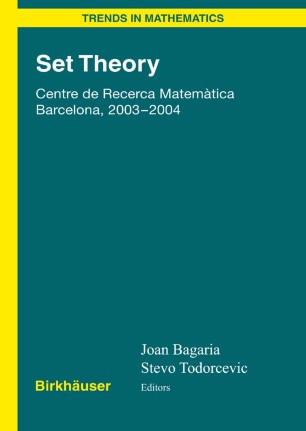 This volume has its origins in the Research Programme on Set Theory and its Applications that took place at the Centre de Recerca Matemática (CRM) Barcelona from September 2003 to July 2004. It consists of two parts. The first contains survey papers on some of the mainstream areas of set theory, and the second contains original research papers.

The survey papers cover topics as Omega-logic, applications of set theory to lattice theory and Boolean algebras, real-valued measurable cardinals, complexity of sets and relations in continuum theory, weak subsystems of axiomatic set theory, definable versions of large cardinals, and selection theory for open covers of topological spaces. As for the research papers, they range from topics such as the number of near-coherence classes of ultrafilters, the consistency strength of bounded forcing axioms, P_\kappa\lambda combinatorics, some applications of morasses, subgroups of Abelian Polish groups, adding club subsets of \omega_2 with finite conditions, the consistency strength of mutual stationarity, and new axioms of set theory.