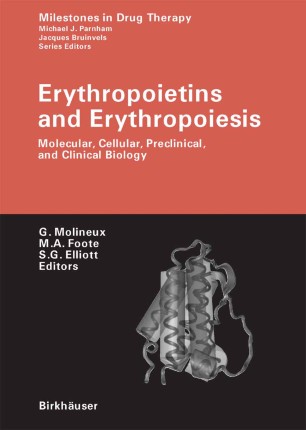 Research on, and interest in, red blood cell formation spans several centuries and was thought to have peaked in the 1980s with the cloning of the eryth- poietin (EPO) gene. In the years subsequent to the cloning of EPO and its expression as a recombinant protein, much was written about EPO. Although much has been learned and published, new, exciting data are becoming ava- able on almost a daily basis. Erythropoietins and Erythropoiesis: Molecular, Cellular, Preclinical, and Clinical Biology compiles both pertinent historical and very recent research on this molecule and its clinical utility. The book is divided into two sections: Background and Basic Science and Clinical Uses of Recombinant Erythropoietins. To begin, Israels and Israels describe the biology of red cells, the hierarchy of erythropoietic progenitor cells, their development to mature cells, and the effects of endogenous EPO on their development. Foote summarizes the historical interest in, and search for, an erythropoietic factor. Once EPO was identified,cloned,and expressed,the path was set for the study of other aspects of EPO biology both within e- thropoiesis and other cellular systems.