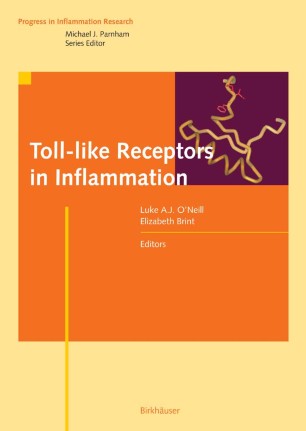 Toll-like receptors (TLRs) are critical mediators of the innate immune response in mammals. This family of receptors recognizes a variety of microbial products or motifs and initiates the host response to infection. Examples include TLR4 which recognizes lipopolysaccharide (LPS) from Gram-negative bacteria, TLR3 which recognizes viral double-stranded RNA, and TLR9 which recognizes CpG DNA motifs, found in both viruses and bacteria. All TLRs possess an intracellular region termed the Toll-IL-1 receptor-Resistance (TIR) domain which is essential for signaling from these receptors. The specificity of signaling from individual TLRs arises from differential utilization of adapter proteins. This specificity results in a tailoring of the host defense response depending on the microbe being sensed. TLRs are increasingly being implicated in both infectious and inflammatory diseases, notable examples being sepsis, inflammatory bowel disease, atherosclerosis, and asthma. There is, therefore, great interest in targeting TLRs therapeutically since a disruption of TLR function will result in a decrease in the production of inflammatory mediators. This volume covers our current understanding of TLRs and their role in inflammation. Given the importance of TLRs in the inflammatory process and their emerging role in inflammatory diseases the book is of great interest to researchers working in inflammation and immunology.