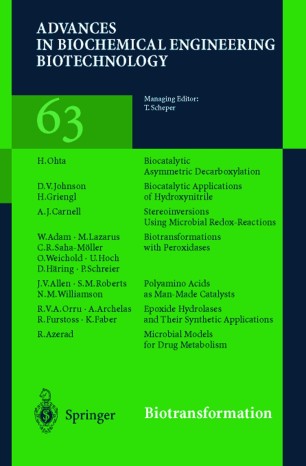 The use of enzymes – employed either as isolated enzymes, crude protein extracts or whole cells – for the transformation of non-natural organic c- pounds is not an invention of the twentieth century: they have been used for more than one hundred years. However,the object of most of the early research was totally different from that of the present day. Whereas the elucidation of biochemical pathways and enzyme mechanisms was the main driving force for the early studies,in contrast it was mainly during the 1980s that the enormous potential of applying natural catalysts to transform non-natural organic c- pounds was recognized. This trend was particularly well enhanced by the recommendation of the FDA-guidelines (1992) with respect to the use of chiral bioactive agents in enantiopure form. During the last two decades, it has been shown that the substrate tolerance of numerous biocatalysts is often much wider than previously believed. Of course,there are many enzymes which are very strictly bound to their natural substrate(s). They play an important role in metabolism and they are gener- ly not applicable for biotransformations. On the other hand, an impressive number of biocatalysts have been shown to possess a wide substrate tolerance by keeping their exquisite catalytic properties with respect to chemo-, reg- and, most important, enantio-selectivity. This made them into the key tools for biotransformations.