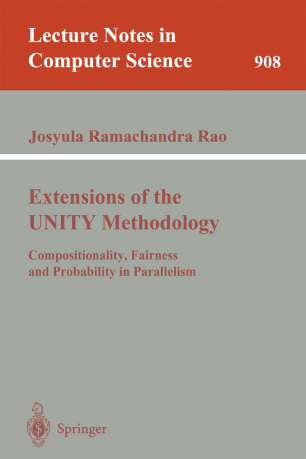 Extensions of the UNITY Methodology

Compositionality, Fairness and Probability in Parallelism

This monograph extends and generalizes the UNITY methodology, introduced in the late 1980s by K. Mani Chandy and Jayadev Misra as a formalism aiding in the specification and verification of parallel programs, in several directions.
This treatise further develops the ideas behind UNITY in order to explore and understand the potential and limitations of this approach: first UNITY is applied to formulate and tackle problems in parallelism such as compositionality; second, the logic and notation of UNITY is generalized in order to increase its range of applicability; finally, paradigms and abstractions useful for the design of probabilistic parallel algorithms are developed. Taken together the results presented reaffirm the promise of UNITY as a versatile medium for treating many problems of parallelism.