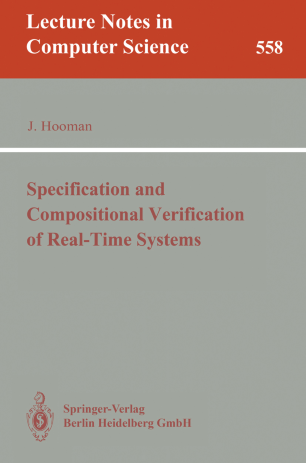 The research described in this monograph concerns the formal specification and compositional verification of real-time systems. A real-time programminglanguage is considered in which concurrent processes communicate by synchronous message passing along unidirectional channels. To specifiy functional and timing properties of programs, two formalisms are investigated: one using a real-time version of temporal logic, called Metric Temporal Logic, and another which is basedon extended Hoare triples. Metric Temporal Logic provides a concise notationto express timing properties and to axiomatize the programming language, whereas Hoare-style formulae are especially convenient for the verification of sequential constructs. For both approaches a compositional proof system has been formulated to verify that a program satisfies a specification. To deduce timing properties of programs, first maximal parallelism is assumed, modeling the situation in which each process has itsown processor. Next, this model is generalized to multiprogramming where several processes may share a processor and scheduling is based on priorities. The proof systems are shown to be sound and relatively complete with respect to a denotational semantics of the programming language. The theory is illustrated by an example of a watchdog timer.