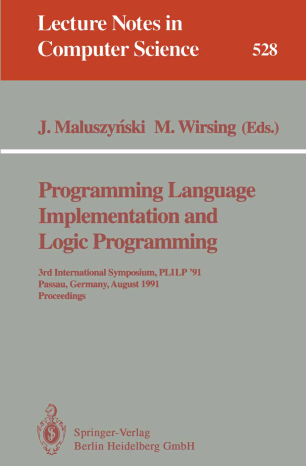 This volume contains the papers which have been accepted for presentation atthe Third International Symposium on Programming Language Implementation andLogic Programming (PLILP '91) held in Passau, Germany, August 26-28, 1991. The aim of the symposium was to explore new declarative concepts, methods and techniques relevant for the implementation of all kinds of programming languages, whether algorithmic or declarative ones. The intention was to gather researchers from the fields of algorithmic programming languages as well as logic, functional and object-oriented programming. This volume contains the two invited talks given at the symposium by H. Ait-Kaci and D.B. MacQueen, 32 selected papers, and abstracts of several system demonstrations. The proceedings of PLILP '88 and PLILP '90 are available as Lecture Notes in Computer Science Volumes 348 and 456.