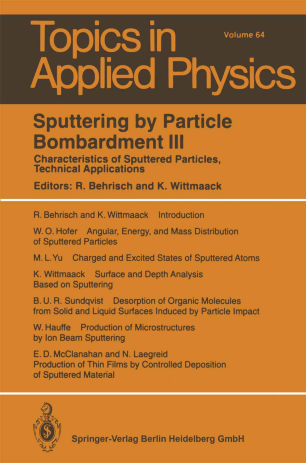 Sputtering, the ejection of atoms or groups of atoms from the surface of a solid bombarded by energetic particles, is a widely observed phenomenon that has many applications in today's experimental physics and technology. This is the third and final volume of a comprehensive review on sputtering. Whereas the first two volumes deal primarily with physical aspects such as the theory of sputtering, experimentally observed sputtering yields and surface topography changes, this volume is devoted to the characteristic properties of the sputtered particles and technological applications of sputtering. The particles are characterized by their energy, mass, and angular distributions, along with their charge and excitation states, while the applications described in- clude surface and depth analysis, micromachining, and the production of surface coatings and thin films. As in the previous two volumes, the various chapters have been written by the main authorities in the field. The book addresses a broad audience: scientists active in the field will find the overview and background information they have long been seeking, while students and new comers to surface science and materials science will find a readable introduction to sputtering.