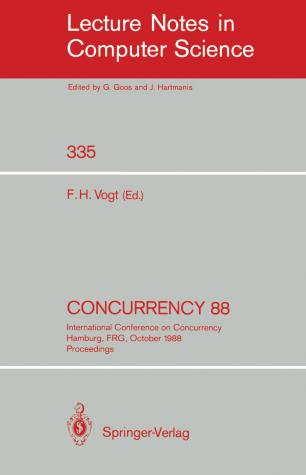 This volume contains the proceedings of CONCURRENCY 88, an international conference on formal methods for distributed systems, held October 18-19, 1988 in Hamburg. CONCURRENCY 88 responded to great interest in the field of formal methods as a means of mastering the complexity of distributed systems. In addition, the impulse was determined by the fact that the various methodological approaches, such as constructive or property oriented methods, have not had an extensive comparative analysis nor have they been investigated with respect to their possible integration and their practical implications. The following topics were addressed: Specification Languages, Models for Distributed Systems, Verification and Validation, Knowledge Based Protocol Modeling, Fault Tolerance, Distributed Databases. The volume contains 12 invited papers and 14 contributions selected by the program committee. They were presented by authors from Austria, the Federal Republic of Germany, France, Israel, Italy, the Netherlands, the United Kingdom and the United States.