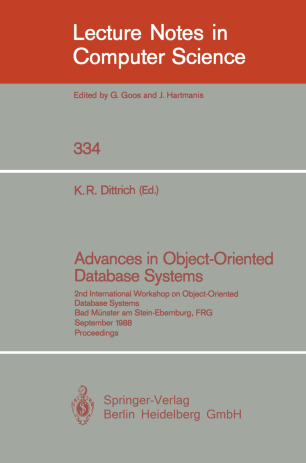 This volume collects papers presented at the 2nd International Workshop on Object-Oriented Database Systems (ooDBS-II) held at the Ebernburg near Bad Münster am Stein, FRG, in September 1988. It thus gives a comprehensive overview of the latest developments in this flourishing area of current database research. Object-oriented database systems have been approached with mainly two major intentions in mind, namely to better support new application areas like CAD/CAM, office automation, knowledge engineering, and to overcome the 'impedance mismatch' between data models and programming languages. The notion of object-orientation in database systems is thus a broader one than e.g. in the area of programming languages. Structural object-orientation provides for data model mechanisms that allow the direct representation and manipulation of highly-structured entities; behavioral object-orientation cares for facilities to associate arbitrary user-defined type-specific operations with data entities; finally, full object-orientation tries to combine the advantages of both categories. Though data model concepts are the decisive feature of object-oriented database systems, numerous other system aspects have to be reconsidered or allow better solutions, respectively, in this light. They include e.g. transactions, implementation techniques, optimization, formalization, the inclusion of rules, and the integration with other systems. A number of research prototypes and even some commercial systems are meanwhile available. Both, approaches to extend databases with object-oriented capabilities and approaches to extend object-oriented programming languages with database features have been and are being investigated.