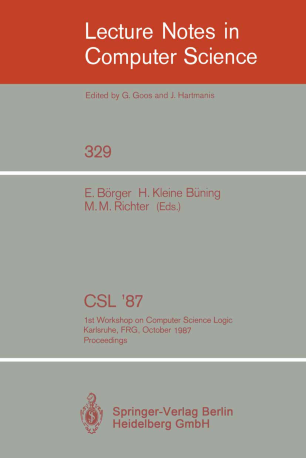 This volume contains the papers which were presented to the workshop "Computer-Science Logic" held in Karlsruhe on October 12-16, 1987. Traditionally Logic, or more specifically, Mathematical Logic splits into several subareas: Set Theory, Proof Theory, Recursion Theory, and Model Theory. In addition there is what sometimes is called Philosophical Logic which deals with topics like nonclassical logics and which for historical reasons has been developed mainly at philosphical departments rather than at mathematics institutions. Today Computer Science challenges Logic in a new way. The theoretical analysis of problems in Computer Science for intrinsic reasons has pointed back to Logic. A broad class of questions became visible which is of a basically logical nature. These questions are often related to some of the traditional disciplines of Logic but normally without being covered adequately by any of them. The novel and unifying aspect of this new branch of Logic is the algorithmic point of view which is based on experiences people had with computers. The aim of the "Computer-Science Logic" workshop and of this volume is to represent the richness of research activities in this field in the German-speaking countries and to point to their underlying general logical principles.