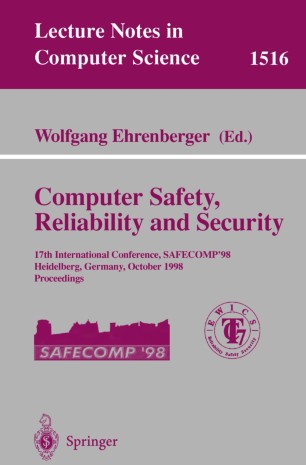 Computers and their interactions are becoming the characteristic features of our time: Many people believe that the industrial age is going over into the information age. In the same way as life of the beginning of this century was dominated by machines, factories, streets and railways, the starting century will be characterised by computers and their networks. This change naturally affects also the institutions and the installations our lives depend upon: power plants, including nuclear ones, chemical plants, mechanically working factories, cars, railways and medical equipment; they all depend on computers and their connections. In some cases it is not human life that may be endangered by computer failure, but large investments; e. g. if a whole plant interrupts its production for a long time. In addition to loss of life and property one must not neglect public opinion, which is very critical in many countries against major technical defects. The related computer technology, its hardware, software and production process differ between standard applications and safety related ones: In the safety case it is normally not only the manufacturers and the customers that are involved, but a third party, usually an assessor, who is taking care of the public interest on behalf of a state authority. Usually safety engineers are in a better position than their colleagues from the conventional side, as they may spend more time and money on a particular task and use better equipment.