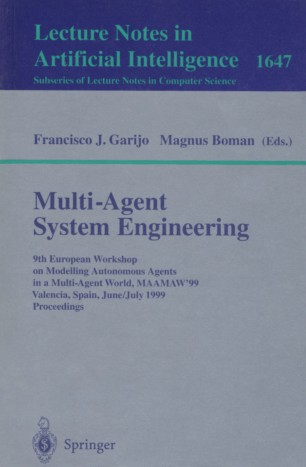 In the ten years since the first MAAMAW was held in 1989, at King's College, Cambridge, the field of Multi-Agent Systems (MAS) has flourished. It has attracted an increasing amount of theoretical and applied research. During this decade, important efforts have been made to establish the scientific and technical foundations of MAS. MAAMAW publications are testimony to the progress achieved in key areas such as agent modelling and reasoning, multi-agent interaction and communication, and multi-agent organisation and social structure. Research results have covered a wide range of inter-related topics in each area including agent architectures, reasoning models, logics, conflict resolution, negotiation, resource allocation, load balancing, learning; social behaviour and interaction, languages and protocols, interagent and agent-human communication, social models, agent roles, norms and social laws, and static and dynamic organisational structures. The feasibility and the viability of the proposed models and techniques have been demonstrated through MAS applications in heterogeneous domains including electronic commerce, co-operative work, telecommunications, social and biological systems, robotics, office and business automation, public administration, social simulations and banking. As the applicability of the technology became understood, the multi-agent paradigm has been progressively accepted by product managers and system developers, giving rise to a considerable amount of business expectation from industry. These expectations do not rest on the concept or metaphor of agent, but on the development of MAS useful in an industrial setting, with real-time systems presenting the biggest challenge.