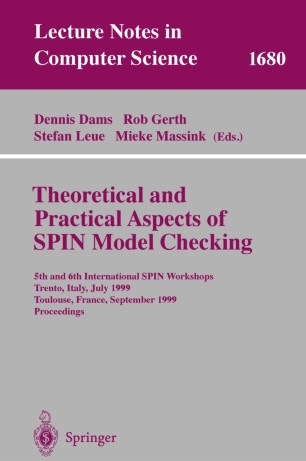 Increasing the designer’s con dence that a piece of software or hardwareis c- pliant with its speci cation has become a key objective in the design process for software and hardware systems. Many approaches to reaching this goal have been developed, including rigorous speci cation, formal veri cation, automated validation, and testing. Finite-state model checking, as it is supported by the explicit-state model checkerSPIN,is enjoying a constantly increasingpopularity in automated property validation of concurrent, message based systems. SPIN has been in large parts implemented and is being maintained by Gerard Ho- mann, and is freely available via ftp fromnetlib.bell-labs.comor from URL http://cm.bell-labs.com/cm/cs/what/spin/Man/README.html. The beauty of nite-state model checking lies in the possibility of building \push-button" validation tools. When the state space is nite, the state-space traversal will eventually terminate with a de nite verdict on the property that is being validated. Equally helpful is the fact that in case the property is inv- idated the model checker will return a counterexample, a feature that greatly facilitates fault identi cation. On the downside, the time it takes to obtain a verdict may be very long if the state space is large and the type of properties that can be validated is restricted to a logic of rather limited expressiveness.